Emergency evacuation swing gate LB 311 is designed for controlling access of people (also people in wheelchairs) and transport of goods outside the main system of customer service in leisure and sports centers. In large factories it can be used for the control of passage of people outside the system of work time registration. The gate`s entrance is wide enough to be utilized as one of the ways of evacuation. The gate is fitted with bi-directional electromechanical drive-block mechanism. It is a simplified version of automatic swing gate LB 211. 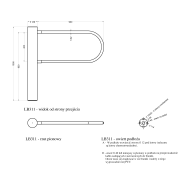 The blocking system is released by the opening impulse set by the steering mechanism and the wing is tilted 90° to the right. The wing is tilted as long as the external impulse lasts. When the impulse is interrupted, the wing returns to its prior blocking position and the passage is blocked. If the next impulse is given while the gate is closing, the wing changes its direction and opens again.